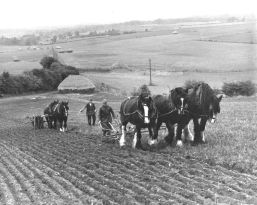 Squire Ben Raper moved his family to Leeds in the early 1930s having studied as a farm apprentice and marrying the farmers daughter Alice Agar. They moved from Roundhay to take on the tenancy at Valley Farm (Smithy Mill Farm) and then Dunstarn Farm. Duncan ploughed with a team of horses on the site of Allerton High School and rented additonal land from Leeds Council (the now David Lloyd site was used for arable and potatoes crops) Scott's for hay (now housing) and took additonal summer grazing at Fountains Abbey. When Leeds Ring Road was built the farms were divided so an underpass was constructed so that farming between the two sites could continue.

Duncan and Don Raper farmed in partnership as Raper Bros and were well know in the area for producting high quality beef and arable crops as well as hay, swedes and potatoes; leaving the dairy industry in the 50s. Don enjoyed the market scene and Duncan the farming side. Sheep were not an option due to high cost of fencing and the danger of dog worrying due to the proximity of urban houses. Store cattle were bought sometimes as far away as Hexham and then fattened on the lowland farms selling through Otley Market to local butchers. The two brothers had four daughter who were not encouraged to farm, the partnership was disolved in the late 70's. Don's Valley Farm buildings were sold for residential development and some land was developed for Yorkshire County Cricket Club but Dunstarn through financial support from Duncan's daughter Linda has remained a working farm an her elder daughter Nicola Burrows lives and works at Dunstarn,  running a succesful flock of Rare Breed Kerry Hill and breeding Kerry Mules sheep as well as an educational children's Pony Party business and peaceful Air B and B holiday let. 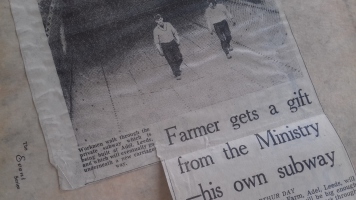 Our own tunnel under the Ring Road

Nicky and Linda attended a Farmland Bird Id Day to formulate policy to promote more birdlife on the farm. The GWCT day was held at Kirby and included a slide show talk and farm walk on February 8th. Proposals include more tree planting for blossom and rou